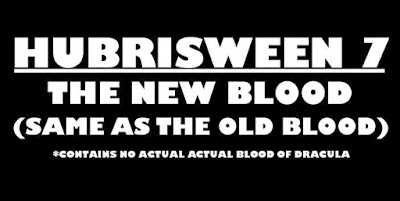 Can it be HubrisWeen time again? Hell YEAH it can be HubrisWeen time again. As we've done for the last several years, some members of the Celluloid Zeroes blogging and podcasting collective will be reviewing 26 horror movies in alphabetical order from October 6 till Halloween day. This time around Checkpoint Telstar and Web of the Big Damn Spider will not be blogging our reviews. Instead, Sean and I will be dropping microsodes of our podcast, The Fiasco Brothers Watch a Movie.

Thank you to all our repeat readers and listeners. It might be 2019 and everything might be on Goddamned fire, but HubrisWeen continues.

B:
The Black Hole

D:
Dark Was the Night
Dead of Night

E:
The Entity
Eyes Without a Face

G:
The Ghost of Dragstrip Hollow
The Giant Gila Monster

I:
I Eat Your Skin
Island of Lost Souls

J:
Johnny Sokko and His Flying Robot in Voyage Into Space
Jugface

O:
The Omen
The Other Side of Madness

R:
The Return of Count Yorga
The Runestone

T:
Tales From the Hood 2
Triangle

Here we are again on October 6, with another group of reviewers providing another group of reviews for HubrisWeen 6. Just like the last five (!) years, everyone's reviewing 26 October-appropriate movies in alphabetical order, from the 6th to Halloween so that the reviews for all the Z films drop on the 31st. For the first time, Web of the Big Damn Spider's Sean Frost and Checkpoint Telstar's Tim Lehnerer are going audiophilic for HubrisWeen, with their podcast The Fiasco Brothers Watch a Movie trying to review their selections in three oversized mini-episodes. Will it work? Probably, but it might be that hubris strikes them down in the end.

A:
A Cold Night's Death
Anaconda
Another Wolfcop
Arcane Sorcerer

B:
Below
Big Ass Spider!
The Black Scorpion
The Boogens

C:
The Car
Cast a Deadly Spell
The Colour Out of Space
Crocodile

E:
Earth Vs. the Spider
Edge of the Axe
Evil of Dracula
Exists

H:
The Horror of Party Beach
House on Haunted Hill
The House on Sorority Row
The House With Laughing Windows

I:
The Incubus
The Innkeepers
I Sell the Dead
It Came From Beneath The Sea

L:
Lake of Dracula
Life
The Lost Missile
Lust for a Vampire

P:
Pieces
Piranha II:  The Spawning
Plague of the Zombies
Play Misty For Me

W:
War of the Worlds
The Werewolf and the Yeti
Willow Creek
The Woman in Black

Oh, wow, it's that time of year again already. Although I founded HubrisWeen back in 2013, I will be sitting out this year because I just don't have the will to write 130,000 words on horror movies just this moment.

But even if I'm not going to be reviewing anything this time around, four other B movie aficionados are working their typing fingers to the bone to bring you 26 reviews of movies in alphabetical order, with the Z list dropping on Halloween itself.

The contributors this year are Chad Plambeck of Micro-Brewed Reviews,  Gavin R. R. Smith of The Terrible Claw Reviews, Sean Frost of Web of the Big Damn Spider, and Freeman Williams of Yes, I Know. I wish them continued luck in their frankly insane endeavor.

A:
Adam and Eve vs. the Cannibals
Alien:  Covenant
Altered
Among Friends

B:
The Beast with 1,000,000 Eyes
Best Friends Forever
Brides of Blood
The Bye Bye Man

C:
Caltiki, the Immortal Monster
Carrie (2013)
Carry On Screaming
Curse of the Undead

I:
I, Frankenstein
The Incredibly Strange Creatures Who Stopped Living And Became Mixed-Up Zombies
In My Skin
Island of Terror

L:
The Last Man on Earth
Life
The Living Head
The Love Witch

M:
Messiah of Evil
The Monster
Monster High
The Mummy (2017)

N:
Near Dark
Night of the Demon (1980)
Night Skies
Nightwish

U:
Under the Shadow
The Undying Monster
The Unknown
Urban Legends:  Bloody Mary

HubrisWeen is a 26-day blogging marathon where five of the Celluloid Zeroes will be reviewing an October-appropriate movie every day through Halloween. Because that's not difficult enough, we're doing it in alphabetical order, with a couple "blank tile" rules to make it slightly easier on ourselves. There are not very many horror movies that start with J, as it turns out. Special thanks to Yes, I Know, Web of the Big Damn Spider, The Terrible Claw Reviews and Micro-Brewed Reviews for joining Checkpoint Telstar this year to celebrate the season. Best wishes to Psychoplasmics, which found the Sisyphean ordeal to be unworkable this time around, but who plans to join us for stress-related deadline panic next year.

Without further ado, here are the links to this year's entries.

A:
Alligator 2:  The Mutation
Alucarda
The Asphyx
Attack of the 50 Foot Woman
The Attic

F:
Fatal Games
First Man Into Space
Frankenstein Conquers the World
Frankenstein Must Be Destroyed
From Beyond the Grave

H:
Hell
Horror Rises From the Tomb
The House in Nightmare Park
House of Seven Corpses
The Howling

I:
I, Madman
I Married a Monster from Outer Space
I Married a Witch
The Incredible Two-Headed Transplant
Intruder

L:
Lake Placid
The Last House on Dead End Street
The Legend of Hillbilly John
Lemora:  A Child's Tale of the Supernatural
The Long Hair of Death

O:
Once Bitten
Orochi the 8-Headed Dragon
Ouija
Outlander
Out of the Dark

R:
Raiders of Atlantis
Razorback
Return From Witch Mountain
The Return of Count Yorga
The Rider of the Skulls

T:
There's Nothing Out There
The Tingler
Torso
Trog
The Trollenberg Terror

U:
Ulzana's Raid
The Undertaker and His Pals
The Uninvited
Uzumaki
Uzumaki

Y:
28 Days Later...
Yokai Monsters:  Spook Warfare
Yongary, Monster from the Deep
The Young, the Evil and the Savage
Zaat

Z:
Zaat
The Zebra Killer
Zeder
Zombeavers
Zombi
Posted by Tim Lehnerer at 5:58 AM No comments:

It's that time again, and much sooner than I anticipated. The third HubrisWeen has begun. For the next 26 days, five B movie blogs will be reviewing a movie a day apiece, for a grand total of 130 reviews running through the end of the month. Because that isn't difficult enough, we're also going to go through the alphabet so that we hit everything from Arachnia to Zaat! as we journey through everything that October-appropriate movies have to offer.

The participating blogs this year are Checkpoint Telstar, Micro-Brewed Reviews, The Terrible Claw Reviews, Web of the Big Damn Spider and Yes, I Know. Long may we continuing doing this sort of thing. Numerous may our site hits become. And if anyone thinks it looks like fun to do this, get in touch with me around July next year as I start planning the logistics for HubrisWeen 4:  The Final Chapter.

I'll be updating this post daily with links to the various reviews (in alphabetical order by movie title, so that people coming here won't necessarily find the links to my blog, Checkpoint Telstar, first every time). I hope everyone involved has fun--I certainly do, for all my griping, and it's great to know that I've got four times as much material to read as I do to write this year. Maybe next time we'll get into double digits for participants.

A:
Anaconda
Anthropophagus
Arachnia
The Asphyx
The Awful Dr. Orlof

B:
The Babadook
The Beach Girls and the Monster
Bedlam
Blood and Lace
Blood Surf

C:
The Car
Carnival of Souls
Cooties
The Crater Lake Monster
The Crazies

G;
Gargoyles
Genuine:  The Tale of a Vampire
The Ghost Galleon
Ghosts of Mars
Ghoulies II

I:
I Am Legend
The Inhabitants
It Follows
The Invasion
Invasion of the Blood Farmers

T:
The Thing (2011)
The Thing From Another World
Thunder Of Gigantic Serpent
Tourist Trap
Twisted Nerve

W:
The Walking Dead
Wendigo
What We Do in the Shadows
Whispering Ghosts
Wyrmwood:  Road of the Dead

Z:
Zaat
Zombeavers
Zombie
Zombie Lake
Zontar, The Thing from Venus
Posted by Tim Lehnerer at 5:00 AM No comments:

Welcome to the second year of HubrisWeen. Late last September the idea hit me--I could review 26 movies in alphabetical order in October as a way to try and get increased audience for Checkpoint Telstar, my nearly zero-reader cult movie blog. Starting on October 6 with Alligator, I was able to post one review every morning through the end of the month. The marathon succeeded in getting more page views, but it was a gigantic amount of effort in a very short time and I'd decided that it was essentially a failed experiment; I wasn't planning on doing another marathon for 2014.

And then three friends from the B movie scene got in touch with me, planning to do their own HubrisWeen marathons and asking for tips. So I resolved to get back in the saddle, and together with Yes, I Know and The Terrible Claw Reviews, we will march forward into a month of monsters, madmen, ghouls and gasps. And a couple of movies that suck on toast, but even those serve as a palate cleanser in the middle of the feast. That's what we're telling ourselves, anyway.

Best wishes to Micro-Brewed Reviews, whose author had to drop out of the challenge unexpectedly. Next time, amigo.

And now, the master list. As the links become available I'll be posting them here in alphabetical order by film. This year I'm overjoyed that there are twice as many reviews for me to read as there were to write. With luck.

B:
The Bay
Beast of Blood
The Boogens

E:
Equinox
The Eye
Eyes Without a Face

H:
The Haunted Strangler
The H-Man
House on Haunted Hill

I:
I Walked With a Zombie
Incident at Loch Ness
The Innkeepers

K:
Kiss of the Vampire
Knights of Badassdom
Konga

N:
The Nest
Nosferatu, the Vampyre
Not of This Earth

P:
ParaNorman
Please Don't Eat My Mother!
The People Who Own the Dark

Q:
Quarantine
Quatermass and the Pit
The Queen of Black Magic

U:
Undead
The Untold Story
Up From the Depths

W:
We're Going to Eat You
Wolfen
The Woman in Black

Y:
The Year of the Sex Olympics
The Yellow Sign
You're Next

Posted by Tim Lehnerer at 5:00 AM No comments: